So, here we are, just a week after many of you heard a message in which if you heard the word ‘sheep’ or ‘lamb’ once, you probably felt like you heard it a THOUSAND times.  You may likely have thought, well NOW can we move on to ANOTHER livestock animal?!  A fatted calf, the cattle on a thousand hills, the jawbone of an ass. Just SOMETHING different?? And YET… as ‘slowly we turn, step-by-step, inch-by-inch’ into this week’s passage, what do we find?  Three out of four passages which contain references to the “Lamb” of God… the Lord is my “Shepherd”… “sheep” who hear the Lord’s voice. Ya THINK that God sure likes those analogies to our ‘wooly’ barnyard friends. The importance of sheep imagery, and how it relates to our faith, is certainly ‘mutton’ to sneeze at… 😉

SERIOUSLY tho’, folks, Jesus was NOT ‘kidding’ around when he was talking to those dubious Jews.  From the instant ‘fermentation’ of water to wine in Cana… to healings of an adult long-time paralytic to the young child of a Roman official… to the feeding of thousands on a Galilean mountainside… Jesus had demonstrated time-and-time again his miraculous, super-natural, God-given >>__power.  And yet, here they are continuing to question him:  “How long will you keep us in suspense?  IF you are the Messiah, tell us PLAINLY.” (John 10:24)

He had to be thinking, ‘How much more ‘PLAINLY’ can I tell you?!’  Jesus says to them, “I have told you, and you do not believe.”  He admonishes them that “the works that I do in my Father’s name testify to me; but you do not believe, because you do not belong to my sheep.  My sheep hear my voice.  I know them and they follow me.” (John 10:25-27)

‘I have done so much more that just tell you.  I have SHOWN you. Not just by my words, but by my ACTIONS.  But because you are not willing to be my sheep… those who really listen to me, who willingly and gladly follow me… who KNOW me… you do not believe in me.’

So what about US?  How different are we than those judgmental, jaded Jews?  Do we fail to believe because Jesus hasn’t told us ‘plainly’ enough who He is?  Are we blind, oblivious, ignorant of the ways that God shows us every day his miracle working power… perhaps in the most simple, fundamental ways?  The beauty of his natural creation… as well as his human creation.  Are we more ‘sheep-ISH’ about our identity as Christians… or ‘sheep-LIKE?’  Every day that we go out into God’s ‘pastures’ of everyday life, are we listening for the voice of the Great Shepherd… to KNOW Him… and to FOLLOW Him?

As we consider today’s passage from Acts, we encounter three principal ‘players’ in this particular ‘Act.  Each referred to as “disciples.”  A lady named “Tabitha.”  A group of her close friends.  And Peter.  And as modern-day ‘disciples’ ourselves, we might learn from all of them.  They can ALL teach us yet even “More lessons from sheep.”

The first ‘sheep’ is Tabitha.  Aka, “Dorcas.”  (Only other place I’ve ever heard this name is in an old favorite movie of Barrie’s, “Seven Brides for Seven Brothers.”)  The name is translated as “Gazelle.”  You know, like that ‘graceful’ animal.  As in, ‘full of GRACE?’

[Now, we might be tempted to think that this lady’s only purpose is to be…]

Now, we might be tempted to think that this lady’s only purpose is to be the object of a miracles accomplished by Peter.  She was, however, MUCH more than simply a ‘handy corpse,’ if you will.  Start with how she if FIRST referred to:

A “disciple.”  While we throw this term around pretty casually, its use here is the ONLY occurrence in the New Testament as the feminine form of that noun.  By coming as the very first word to describe her, clearly Tabitha/Dorcas’ identity as a disciple is of primary importance to who she is.

John also chooses to give clarity as to just what it is that sets her apart as a ‘disciple.’  He writes that “she was devoted to good works and acts of charity.”  (Acts 9:36)  And in particular, her acts of charity were directed at “widows”… who were “weeping and showing … clothing that (she) had made while with them.” (Acts 9:39)  Most of you know that widows in this culture were WAY down on the totem pole.  That unless they had a benefactor, a ‘sponsor’ to care for them, they could likely starve. NO government aid programs in THESE days!  You might say >>__that Tabitha was an early leader of the Matthew 25 initiative:  “Whatever you’ve done for the least of these, my brothers and sisters, you’ve done for me.” (v. 40)  She was not simply a follower who  continually received ministry; she was a disciple who practiced ministry…  operating one of the very first ‘thrift stores’… at no charge!  Meeting a marginalized segment of society at their very point of need…

The second ‘sheep’ we have is Tabitha’s ‘flock of friends.’  Friends who, even after she has died, STILL urgently called Peter to come.  Did they expect him to be able to restore her to life… to raise her from the dead?  Well, like they say, you ARE known by the company you keep. 😉

[In her helpless, lifeless state, Dorcas’ resurrection depended on the faith…]

In her helpless, lifeless state, Dorcas’ resurrection depended on the faith and action of her friends.  Here is a living… quite literally…. Example of the power of the Church as a corporate body.  There are most certainly those times when WE can find ourselves in a ‘helpless’ state, and the body of Christ functions to edify, to build up those who are weak, lifeless, without HOPE.  Offer words of encouragement.  PRAY with and for.  Physically BE there in times of struggle.   There will always be times… even, and especially, in the life of believers… when they will need to lean heavily upon the faith of sisters and brothers to bring them through.   Sometimes our fellow ‘sheep’ also function as ‘shepherds’….

And finally, there is that ‘Shepherd of the Sheep, J.G. (Junior Grade),’ Peter.

>>  When those two friends of Dorcas come and ask him to “Please come to us without delay,” he doesn’t even hesitate.  No thoughts, no time to come up with >>  excuses.  It says simply, “So Peter got up and went with them.” (Acts 9:39)

So do you think that raising this stranger from the dead was his FIRST thought?  Probably not.  He likely was thinking of this as a pastoral bereavement call.  Time to bring comfort to the family and help them to accept the new reality of life without their friend and benefactor.

But maybe a funny thing happened on the way to the wake.  Perhaps the voice of his heavenly Father… or of His risen Son… spoke to Peter on that road to Joppa.  Perhaps a ‘small still voice’ asked of Peter, ‘Do you really believe in the power of the resurrection of Christ?  Well, if so, maybe it’s time to put your ‘hands where your heart is.’  To put your ‘preaching into practice.’  That if you really DO, Peter, like you said, “love me,” then its time not just to ‘feed the sheep’… but to help ‘raise them up.’

That change in Peter’s disposition and faith to bring about the intervention of God to hurting people… rather than taking the easy way out… is clearly a miracle.  A miracle that is within reach for ALL of US!  Our miracle is to respond to God’s call faithfully;  to unleash the potential that lies at our very fingertips to bring life out of death.  To be channels of living water, providers of the miraculous power of JESUS in order to bring help to the helpless… hope to the hopeless… life to the lifeless.

Does that mean that YOU will be called by God to say to another human being who lay before you dead to “Get up”?  Perhaps.  But what I AM saying is that you and I must NEVER sell ourselves short on the ability of God to use us, ‘cracked pots’ that we all are, to pour out on others the love, the mercy, the healing of our Almighty God.  As we listen to the voice of the only truly ‘Good Shepherd,’ we will come to know Him.  And follow Him.  And as we do, Jesus makes us that same promise we read earlier:  “I give you eternal life, and you will never perish.  No one will snatch you out of my hand.” (John 10:28)

[Secure in that ‘blessed assurance,’ may we live lives that bear witness to…]

Secure in that ‘blessed assurance,’ may we live lives that bear witness to that confidence.  Like Dorcas, may we also be “devoted to good works and acts of charity.”  Not simply a follower who  continually receives ministry, but a disciple who practices ministry.   Like her friends and fellow disciples, may we too be a living Example of the power of the Church as a corporate body… one of FAITH in ACTION.  A people of prayer and presence.    Like Peter, may we be ready to ‘get up and go’ when called upon… willing vessels of God’s power to heal.  May we continue to ‘learn our lessons’ for all those saints of the faith who have gone before us… so that, unlike he said to those doubting Jews, Jesus might reach out His loving hand to us and say, “You DO believe… you DO belong to my sheep.”  And may ALL of ‘Jesus’ little lambs’ say… ‘AMEN!’

CALL TO CONFESSION:  The Psalmist wrote that “God is our help and stay; a very present help in trouble.”  God is always there to guide our journey and eager to forgive us when we go astray; we simply must pray for the initiative to approach his throne of grace with confidence.  Therefore, in humility and faith, let us confess our sins against God and neighbor… first aloud, and then in silence.

ASSURANCE OF PARDON:  Do not fear! You can place your trust in God, for God will lead you, comfort you, protect you… particularly with regards to our SINS.  You and I are not alone to face all the difficulties of life. God is with you and will lift you up. Rejoice, for you are loved by God.  And may we never forget…

On these Sundays, have ready a piece of bread (or cracker) and a cup of juice to Join us for Communion during the service.

(Service Bulletins are posted on the Home Page each week, so you can follow along and join in prayers & singing) 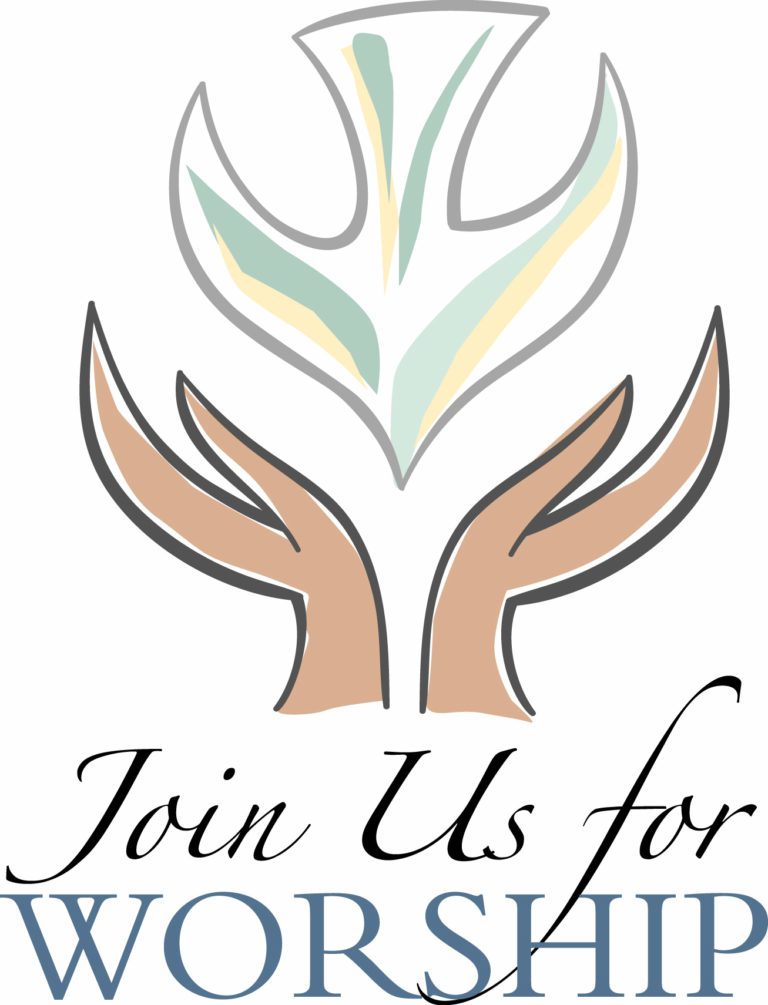 Join Us for Worship on Sundays at 11:00 am, visit out Facebook page to join in the live stream of the service.